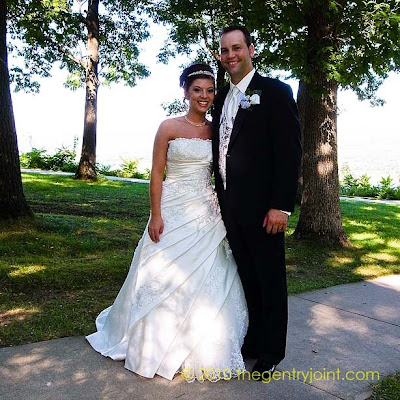 Congratulations to Michael (son of Robyn and Cathy) and Trisha Denning who were married August 28th at Pikes Peak State Park in McGregor,Iowa.The people of First Congregational congratulate Michael and Trisha as they begin a new life together. God bless them.
Posted by FCC at 3:07 PM No comments: 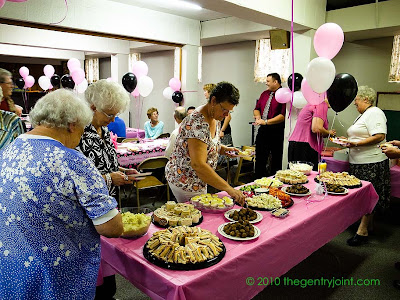 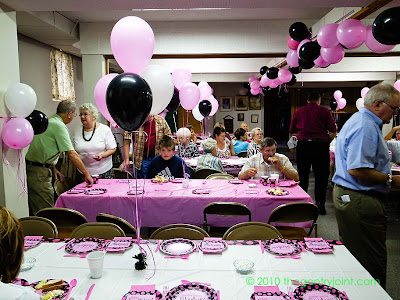 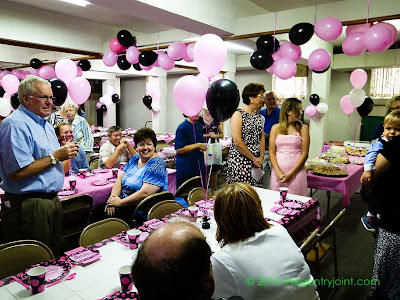 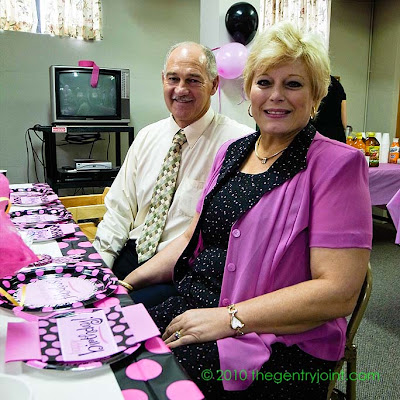 Today, August 22, 2010 the congregation of First Congregational partnered with the family of Heleen Von Tonder to surprise and celebrate her 50th birthday last week. It was a wonderful celebration with delicious food and warm fellowship. We congratulate Heleen on her milestone and wish her many more blessings in Christ's name.
Posted by FCC at 6:06 PM No comments: 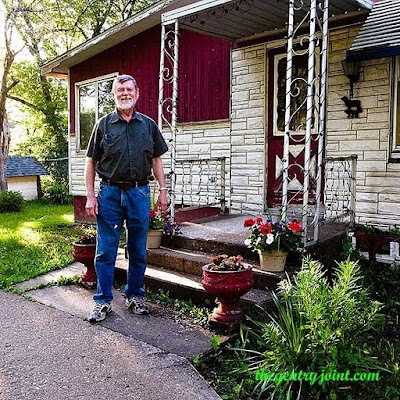 Richard Bruce Walters
Richard B. Walters, 63, of McGregor, Iowa, passed away peacefully at his home on June 19, 2010, following a courageous battle with pancreatic cancer. He was born September 11, 1946, in McGregor, Iowa to Burton and Lorraine (Schott) Walters. He was baptized and confirmed at the First Congregational Church in McGregor.
Rick grew up with a love of the Mississippi River and spent his early summers working at Art’s Boat landing or being with his friends on or in the water. He was an avid sports enthusiast and enjoyed hunting, especially ducks and turkeys, and fishing. He was also a die-hard Chicago Cubs, Bears and Iowa Hawkeyes fan.
Rick graduated from Mar-Mac High school in 1964 and from Winona State College in 1968 where he majored in biology and minored in geology. He enlisted in the Navy and spent time in San Diego, Portsmouth, Norfolk and the majority of the time at Bethesda Naval Hospital in Bethesda, Maryland. Upon returning to McGregor he worked at Prairie du Chien Memorial Hospital in the lab and x-ray departments for over 36 years.
He was a member of the McGregor Hook and Ladder Co. for 28 years and a member of Ducks Unlimited.
He is survived by two siblings, Burton (Donna) Walters, Jr., and Marsha (Daniel) Bickel all of McGregor. Nephews, Burton Walters III, Jeff Bickel. Nieces Terri (Robert) Wall, Jenna Bickel and great-niece and great-nephew Kayla and Curtis Wall.
Rick was preceded in death by his parents, Burton in 1979 and Lorraine in 2009 and grandparents Bertram and Violet Schott and Irving and Matilda Walters.
He was a kind and gentle person and will be missed by his many friends. A memorial service and celebration of Rick’s life will be held at a later date. Interment will be at Pleasant Grove Cemetery.
The Thornburg-DeVries Funeral Home is in charge of arrangements.
Posted by FCC at 6:26 AM No comments: 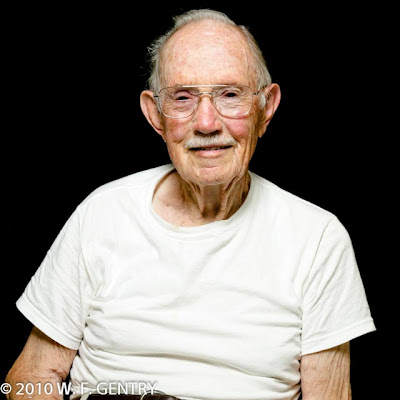 Virgil L. Staples
Virgil, 91 of 306 Watson ST, Garnavillo, IA died Wednesday August 11, 2010 Finley Hospital, Summit Center Dubuque, IA Services will be held at 11:00 A.M., Monday at the United Church of Christ, McGregor, IA with Rev. William Gentry officiating. Friends may call from 4:00 to 8:00 P.M., Sunday at the Thornburg-DeVries Funeral Home, McGregor. Burial will be in Pleasant Grove Cemetery, McGregor where military rites will be accorded by the McGregor American Legion. Condolences may be sent to the family at www.thornburg-devries.com He was born November 11, 1918 in Auburn, IA son of Howard W. Staples and Alvina (Borcherding) Staples. He received his education from rural Iowa schools graduating from The American Instituted of Commerce as a member of the Phi Theta Pi International Commerce fraternity. Virgil was a veteran of the Army Air Corps, serving from 1942 to 1945 in the 5th Air Force 80th svc group in WWII as a technical sergeant. He married Donna Paden on June 25th, 1950 at the Methodist Church in Sumner, IA. Virgil and Donna made their home in McGregor where he worked with his father and later he ran the H.W. Staples and Son Plumbing & Heating in McGregor from 1950 to 1982. Together they had three children, two boys and one girl. Shortly after retiring he married Marge Musser on February 26, 1983 in Des Moines, IA where they lived for 22 years. He was a member of the American Legion, where he served a term as adjutant; Kiwanis club, where he served a term as president; Masonic Lodge where he served terms in offices including Master of the Lodge; and First Congregational Church where he served on various boards. He also served seven years on the Clayton County Board of Education and eight years on the N.E. Iowa Council of the Boy Scouts of America. He loved the outdoors, hunting, and fishing and was an avid gardener. He also spent many years collecting buying and selling antiques. He was survived by his brother Richard Staples of McGregor, IA and family; his sons Robert (Donna) Staples of McGregor, IA, Steve Staples of Denver, Colorado, his daughter Mary Staples of Longmont, Colorado; his granddaughter Dana Roberts of Van Buren, MO; his three step-granddaughters Prema, Tasha, and Sabrina Friedlein, all of McGregor, IA; and his great-step-grandson Stanley Friedlein of McGregor, IA. He was preceded in death by both his wives and his sister Helen Beving of Eloy, Arizona.
Posted by FCC at 2:01 PM No comments:

THE SWANSONS CELEBRATE 50 YEARS OF MARRIAGE 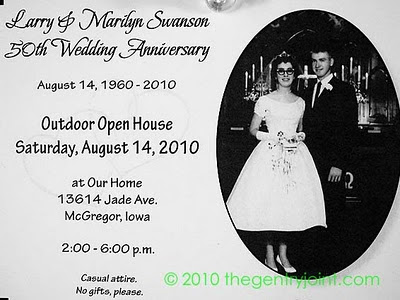 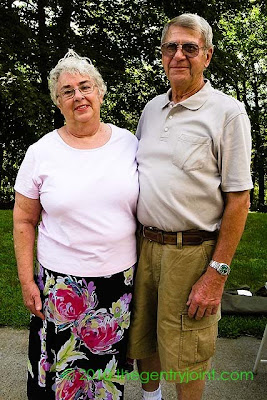 The people of First Congregational Church congratulate Larry and Marilyn Swanson on their 50th anniversary celebration. Congratulations Swansons, may God crown your union with ever increasing joy and many more years.
Posted by FCC at 6:09 PM No comments:

The new piano/organ has arrived in time for the Aug 1 services and was dedicated at first service that morning. The previous organ was becoming undependable and a possible fire hazard. It sounds great and there are a lot of possibilities for it. It is very nice looking. Ryan showed us just a few of the sounds possible during the morning services. Come have a look at it and join us for a Sunday morning service to hear it's beautiful sounds. First service is a conventional service at 8:00; the second service is a praise service at 10:00. Second service has a live band for accompaniment. We are also working on replacing the sound system which will enhance the sound of the instrument even more and many other things. Jackie is in the process of selling piano keys. You can buy a key (or more) in honor/memory of someone or just for yourself. Each key sells for $40 and your name and dedication will be marked down.
Posted by FCC at 7:33 AM No comments:

The First Annual Drive-Through Chicken BBQ (maybe)was held outside First Congregational Church in McGregor on July 25. The reason I say "maybe" is because it sounds like a possibility that it may even occur more than once a year, at least this year. Anything is possible with this group. We'll be sure to let you know. The BBQ was a big success. We did have a couple of problems, but they could be called "good" problems. We ran out of chicken, potato salad and beans. A couple of people made supply runs and would you believe, we still ran out again and had to turn away a number of people. Next time will be better. The food was delicious. You got 1/2 a chicken, potato salad, baked beans and a dessert for $7.50. It was a lot of hard work for a lot of people but, as usual, everyone seemed to have a lot of fun. Did I say that the food was delicious? Keep an eye out for the next one. A big thanks to everyone who worked or came to eat. A sincere apology to the folks who had to wait for their food and especially to those we had to turn away. There was even a Chicken Man (I think) running around even during our morning service before hand.
Posted by FCC at 7:08 AM No comments:

July 4 Ecumenical Service at the Peak

Here I am running behind on posts, like usual. The July 4 Ecumenical Service at Pikes Peak was great. It looked like it might rain but it held off and it was a beautiful day for an outdoor service. The service was well attended and everyone seemed to enjoy it and the fellowship and rolls afterward.
Posted by FCC at 6:58 AM No comments: